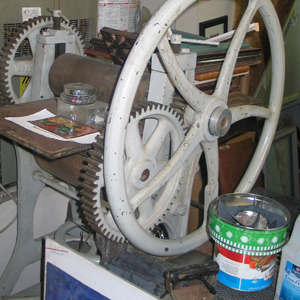 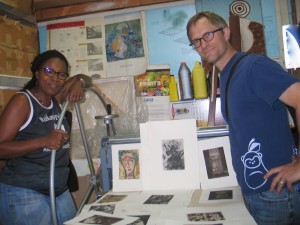 Todd visited the studio of mixed media artist Adeola Davies-Aiyeloja this afternoon for the upcoming print exhibit he is curating for Chaffey Community Museum of Art (CCMA) set for summer 2015. Todd found out about Adeola from CCMA coordinator Jenelle Lowry and was pleased and grateful to meet Adeola who graciously opened her studio up to Todd and his mother who came along for the ride. Adeola showed Todd her SolarPlate etchings of train photographs she has taken over the years as well as some of her mixed media monotype prints. Adeola told Todd about her trip to South Africa and how she is going to turn some of her train photographs into SolarPlate etchings. Although they are of contemporary South Africa they have a look of the past with a train conductor stamping tickets in antique rail cars. We can’t wait to see her final prints. These future prints combined with Adeola’s large, colorful monotypes will present a powerful coalition on the museum walls.