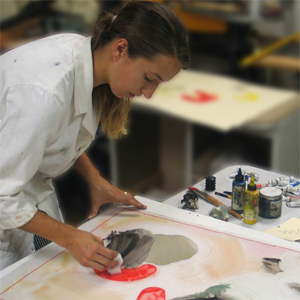 Mixed Media artist Erin Morrison returned to Press Works this week to continue working on her series of large-scale monotypes using gouache, watercolors, and printing inks. The prints are beautiful and we can’t wait to put them up for viewing and purchase. Erin decided to work with a new palette of printing inks which kept Todd busy mixing inks. Erin tried her hand at it too and created a beautiful muted transparent green seen below but not nearly as apparent in the photograph than in person.

Every printer has their secret bag of tricks or so they think and make a big deal about keeping it a mystery so although we have told you our approach let’s just say the magic is in the process. Until next time.