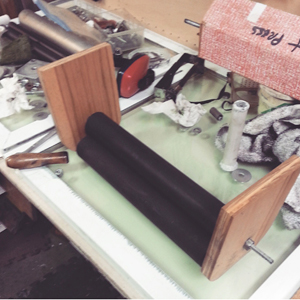 I’ve seen photos of triple rollers for applying ink to litho plates but the cheapskate in me has kept me from purchasing one.  Several hundred dollars if I’m not mistaken.  They are supposed to eliminate lap marks on the litho plate. I have one that someone built for a past studio mate but it has never worked that well as an inking roller. When that same studio mate left for greener pastures they also left behind a bunch of used offset litho rollers. After countless times of taking the rollers out of their boxes to stare at them and try to figure a way to make them into brayers I finally hit upon the idea of using them to fabricate my own triple roller.

I challenged myself to use only parts I could find laying around the shop.  Although I don’t need much of an excuse to visit a hardware store of any size or brand I didn’t want to spend all day shopping for parts that in the end may or may not have worked. The process would go faster if I stayed put and used what I had on hand.  The end result was very satisfying and was such a success that I made a second roller several weeks later. 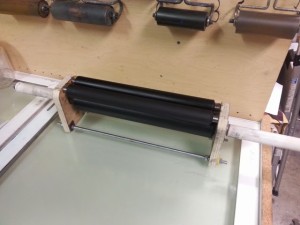 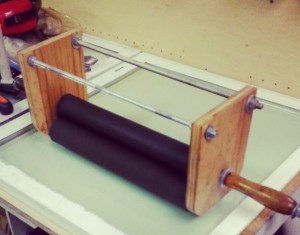